Congratulations to Jennifer and Richard.  They got married at the beautiful Separk Mansion located in Gastonia, North Carolina over the weekend.  I’ll be sharing more photos from their wedding soon.

Posted in Weddings
no comments
add a comment
link to this post
email a friend
Saturday, April 9, 2016

I was scrolling FaceBook early this year and noticed an alarming post in my newsfeed from one of my former wedding clients.  The post showed an image of her looking in the mirror at a salon with a freshly shaved bald head.  The caption on the image announced that she was diagnosed with breast cancer.  I was shocked to hear that, even though I know that cancer doesn’t care who it decides to attack.  I hate to see it attack anyone in general but I really hate to see it impact people that I know.  Unfortunately, I have seen it impact friends and family and in some cases I’ve been by their sides as they fought the battle.  I’ve seen cancer get it’s but kicked and in some cases I’ve seen it win.  Last year it took away two great women that I loved within days of each other.  One was my Aunt Suzie Hicks and the other was my next door neighbor/extended family, Mrs. Joyce Miller.  My Aunt Suzie fought cancer off for years.  I think it was because she was in such great shape.  She was a beast on the tennis court and  she also had a wonderful spirit that probably scared cancer.  Mrs. Joyce Miller was my next door neighbor from the time I was three until I went off to college.  I grew up during the time when people believed that it took a village to raise a child. Mrs. Miller was a part of that village.  She was the voice of reason.  She didn’t mind telling me when I was right or wrong and she didn’t mind telling my parents if I was doing something that I had no business doing. Rest in peace to those great women. I got off on a tangent but those women were on my mind.  So anyway, I reached out to Mariscia because I wanted to do a photo shoot for her.  Pictures can make people feel beautiful, empowered, and joyful, so I decided that photography would be my contribution to her fight. It took a while to get the session scheduled due to Mariscia’s chemo schedule. We finally ended up doing the photo session on the day before her mastectomy.  The photos were taken around the corner from her home in a wooded area and on the street.  The session started off with me, Mariscia, and her make up artist.  Mariscia’s mom then showed up, and then a few of her friends showed up.  I joked about how she had a large posse at her photo shoot but I was really admiring the love and support that her friends and family were there to provide.  The shirt that Mariscia is wearing says “Inspire And Be Inspired”.  She definitely inspired me.  I hope that the strength in her photos inspires her and others. 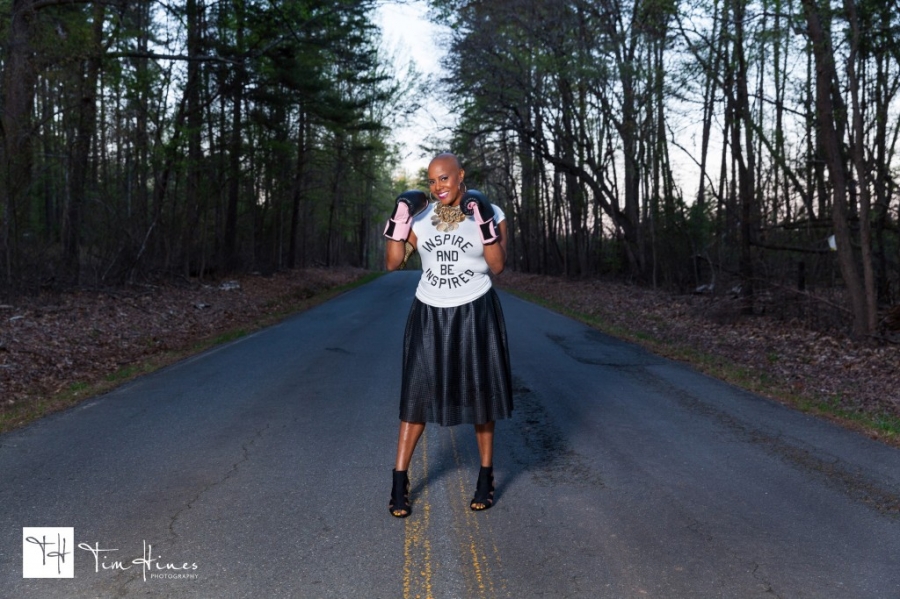 Posted in PortraitsTags: Portraits Charlotte Photographer
no comments
add a comment
link to this post
email a friend
Sunday, April 19, 2015

The wedding ceremony took place at Chappell Memorial Baptist church and the reception was at Roof With A View in uptown Charlotte. More images are coming soon.